The project was an idea then-called "Picaboo for iPhone", which worked along the same lines as Snapchat does today: your pictures disappear almost instantly.

The app's name was later changed to Snapchat and proliferated globally, attaining 70 million monthly active users in April and reportedly growing by 10 million a month.

The Turner sisters now find themselves the scantily clad promoters of one of the world's most popular applications. Their embarrassment may be compounded by the fact that Snapchat is heavily associated with private sexual images, because the pictures are wiped rather than stored.

The sisters' lawsuit, filed in the Los Angeles Superior Court, accuses Mr Spiegel and Mr Murphy of deliberately misleading the girls and taking advantage of them.

But Gawker magazine said the sisters' claim was "almost certainly an opportunistic attempt at cashing in on Snapchat's large public rep".

The Turner sisters agreed to pose for a photo shoot on a beach in , the mooted purpose of which remains unclear. But there are similarities.

In March, Australian radio personality Fifi Box discovered her photograph was being used by an overseas diet pill company without her knowledge or permission.

In another case, US blogger Rachele Cateyes had her bikini shot used by a weight loss firm to market its products. Snapchat has just emerged from an month lawsuit with Reggie Brown, another former Stanford college resident, who claimed to have invented the idea.

That's OK, though: even if you wanted personal snaps from Sansa, there's plenty of good stuff on her other accounts. On Instagram, you can find lots of selfies with famous friend cameos — and yes, there's a lot of Maisie Williams.

It's a little weird to see Arya and Sansa in fishnet tights and jeans, but they look adorable nonetheless. You can also catch other Game Of Thrones stars making appearances.

Like none other than Iwan Rheon, aka Sansa's mortal enemy Ramsay Snow, who she exacted beautiful revenge upon in Season 6.

But IRL, they're pals. Turner's Instagram is a lot more personal than her Twitter account, where she mostly posts news about her shows, movies, and other projects.

But it's another good way to get to know her: for example, did you know that the actress is hosting a docu-series on Huffpost UK called PowerShift, about the way social media is a powerful tool to implement activism and change?

The first episode, which premiered recently on July 13, focused on BlackLivesMatter. So, even though Turner sadly doesn't have a Snapchat, if you're a Sansa fan, her Instagram and Twitter should be plenty to tide you over.

You can catch a lot of good behind-the-scenes action from her photoshoots, getting ready for awards shows, and more adorable stuff — like this selfie that was clearly just a ploy to catch none other than Ryan Gosling behind her at the Screen Actors Guild Awards. 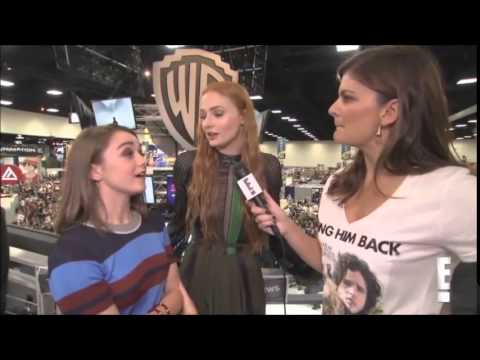